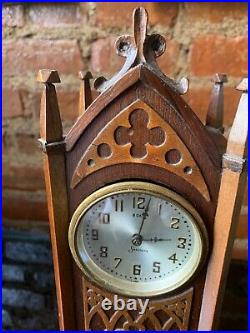 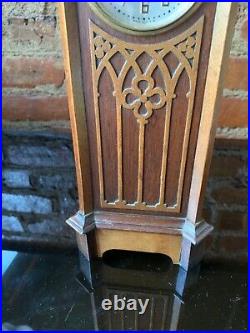 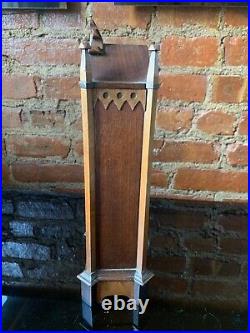 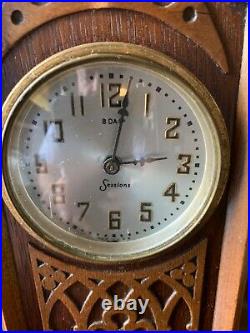 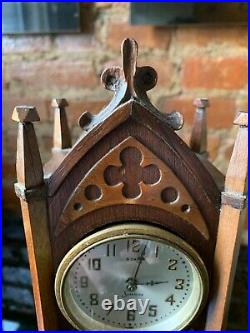 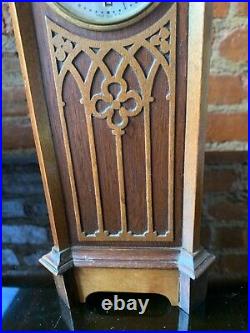 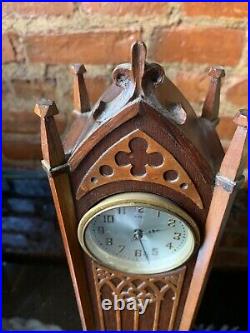 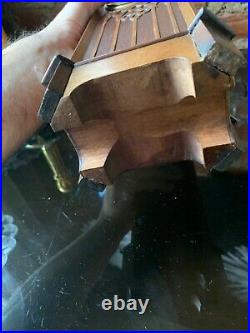 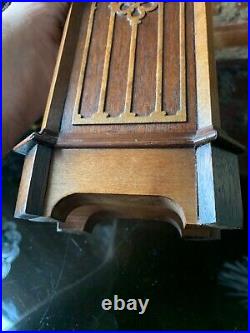 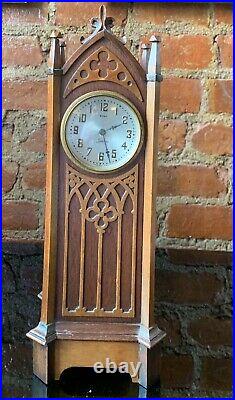 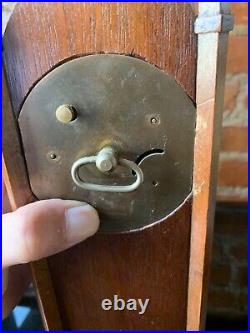 I call this one the Hogwarts clock, no, this clock is not from a Harry Potter movie. It was made by Sessions company invaded in a nice gothic wood case Like a cathedral. The clock measures 12 1/2 tall by 4 1/2 at the widest by 3 3/4 in depth. The detailing and carving is fabulous.

One of the most interesting clocks I have ever seen. Its marked 8 days Sessions made in the USA on the face Dial. That lock is not running (maybe it was over wind). There are two tiny boards missing that hold the clock with the backplate (please look at the last picture). Sessions, who ran the Sessions Foundry Company in Bristol, Connecticut, and his nephew A.

Sessions bought the controlling interest of the fledgling clockmaker E. Welch Company, which was about to shut its doors. Welch had become the Sessions Clock Company, and the production of all clock partsmovements, dials, artwork and castings, and casescontinued in nearby Forestville.

The peak period of production for the Sessions Clock Company was from 1903 to 1930. At first, Sessions simply continued to produce Welch clocks, notably the black mantel clock. Collectors neednt look past the label.

Welch and Sessions Clock Company. The process of phasing out the Welch brand was gradual, though by 1920 the old name was practically gone. Around that time, Sessions began upgrading its clocks and moving on from the old Welch designs.

One of the first of these new Sessions clocks was a then state-of-the-art regulator. Clocks from this period are favorites of collectors today. The move to regulators worked well for awhile, but by 1930 Sessions realized that electricity was the wave of the future. Thus, the company began producing electric clocks, radio timers, and even televisions. The Great Depression caused Sessions to cease production of spring-wound clocks altogether in 1936, and, during World War II, the Sessions plant devoted itself to the manufacture of war materials.

After the war, Sessions shifted gears again by making cheap electric alarm clocks. In 1956, it changed its name to The Sessions Company as sales began to slump. Although innovation was not the companys strong suit, in the 50s it introduced The Lady, a family-planning clock that was set to a womans menstrual cycle to show the days during which she was most fertile. Not surprisingly, these clocks were never very popular during the conservative 1950s, although they are highly sought after by collectors today. That same year William Sessions, Jr.

Left Sessions to become a founding member of The New England Clock Company. By 1969, The Sessions Company was no longer making clocks. The item "Antique Rare Sessions Carved Oak Mantle Gothic Clock from 1885-90" is in sale since Monday, October 19, 2020. This item is in the category "Collectibles\Clocks\Antique (Pre-1930)\Shelf, Mantel".